Should you construct a Leaf/Spine fabric with 10G or 40G?

In this post I’ll make the simple observation that using 10G interfaces in your leaf/spine fabric scales to more servers than using 40G interfaces, all with the same hardware, bandwidth, and oversubscription.

Let’s suppose you’ve decided to build a Leaf/Spine fabric for your data center network with the current crop of 10G/40G switches today that have QSFP ports. Each QSFP port can be configured as a single 1 x 40G interface, or 4 x 10G interfaces (using a breakout cable). With that option in mind, does it make more sense to construct your Leaf/Spine fabric with N * 40G? Or instead should you use N * (4 x 10G)? Well, as always, it depends on what you’re trying to accomplish.

If I configure each QSFP port in the fabric as a single 40G interface, how wide will I be able to scale in terms of servers? 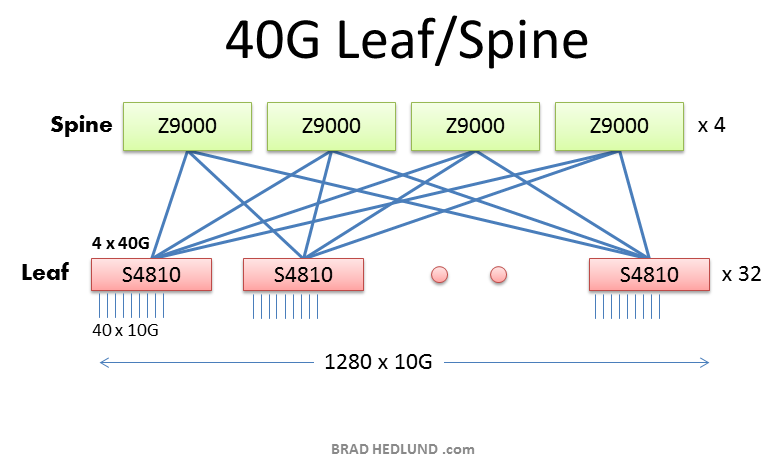 In building this fabric with 40G interfaces, the largest I can go is 1280 10G servers at 2.5:1 oversubscription. That certainly accomplished my initial scale target of 1200 servers, but I’m stuck there. Before I can get to my 5000 servers stretch goal I’ll need to re-architect my fabric.

Now, before we start re-architecting our fabric, let’s see what would have happened had we decided to configure each QSFP port as 4 x 10G interfaces, rather than our first choice of 1 x 40G.

If I configure each QSFP port in the fabric as 4 x 10G interfaces and using an optical breakout cable, how wide will I be able to scale in terms of servers? 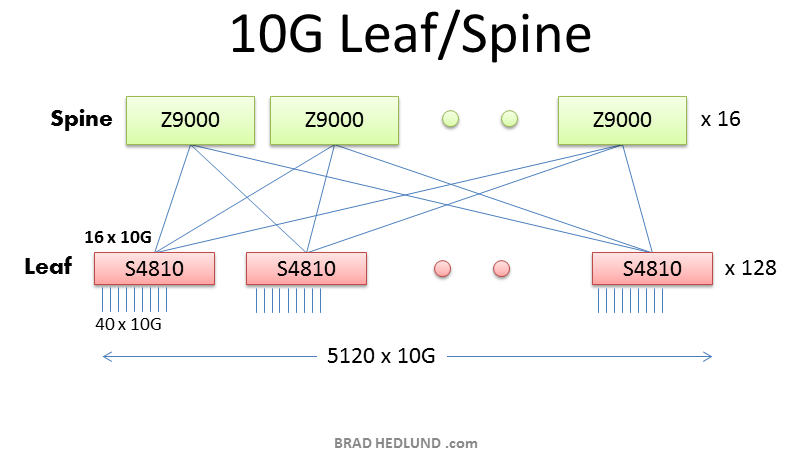 The four times greater scalability of this design was enabled by simply choosing to build my Leaf/Spine fabric with 10G interfaces, rather than the obvious choice of 40G. Compared to the previous 40G design, all of the hardware is the same. And all of the bandwidth, latency, and oversubscription is the same too.

The magic boils down to two simple principles of scaling a Leaf/Spine fabric. Port count, and port count.

Using an optical breakout cable to get 4 x 10G from a single QSFP port will likely reduce the supported distance of each 10G cable run. A normal 10G SFP+ link on multi-mode fiber can go 300 meters, but you may only be able to go 100 meters with QSFP and optical breakout cables. Be sure to verify that fact and see how it may impact the max distance you can have between your Leaf and Spine switches. This fact alone may put a limit on your fabric scalability, be it 10G or 40G.

Yep, these Leaf/Spine fabrics today are Layer 3. The switches form a standard routing protocol relationship with each other, such as with BGP or OSPF. Today, that works well for applications such as Hadoop, Web and Media applications, HPC, or perhaps an IaaS cloud using network virtualization with overlays. Moving forward, you will start to see network vendors supporting the TRILL standard, at which point you’ll be able to build the same Leaf/Spine architecture to support a Layer 2 topology between racks. With TRILL, you’ll have the freedom to choose different network vendors at the Leaf and Spine layers, rather than being locked in with a vendor specific proprietary protocol or architecture (e.g. Cisco FabricPath, Brocade VCS, and Juniper QFabric).

Yep, in the 10G fabric you have 4 x more interfaces to configure, 4 x more cables, 4 x more routing protocol adjacencies, 4 x more infrastructure subnets, and so forth. For you, that might be a problem or no big deal at all.

Why would you build a Leaf/Spine design anyway? Well, because you might like the fact that your fabric “Core” is striped across lots of individually insignificant pizza boxes (think RAID), rather than the typical approach of anchoring everything on two expensive mainframe like power sucking monstrous chassis.