Last summer I was invited by the Nexus 7000 product management team at Cisco to help co-author a whitepaper covering general guidelines and best practices for network integration of Cisco UCS with Cisco Nexus 7000. The idea was to take a lot of the content already presented in my video series Cisco UCS Networking Best Practices (in HD), extract the material most relevant to Cisco UCS + Nexus 7000, and publish a narrative with diagrams in a whitepaper format.

I am pleased to announce that as of today this whitepaper is now the official Cisco publication: 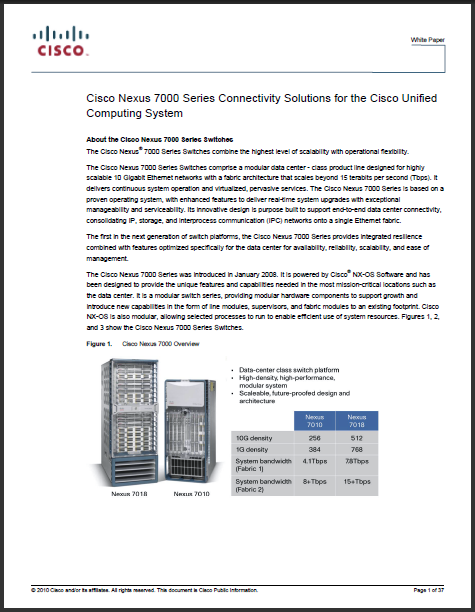 In summary, this whitepaper discusses the following topics:

What's NOT covered in this whitepaper:

The above items not covered in this whitepaper may be the subject of future blogs here and/or additional Cisco whitepapers and CVD’s. However, I will take this opportunity to write a few comments on each subject.

Nexus 7000 switches configured for FabricPath have a new switch port mode available called, you guessed it, a FabricPath port. These are the ports that directly connect to other FabricPath capable switches and must be explicitly configured as such.

All other standard non-FabricPath ports are referred to as “Classic Ethernet” ports that normal switches and servers connect to without any knowledge or awareness of FabricPath. This is the default port setting.

The Cisco UCS fabric interconnect is not a FabricPath aware switch, and as such should be connected to the Nexus 7000 on a normal “Classic Ethernet” port, in either End Host mode or Switch mode (end host mode is still preferred). The Nexus 7000 may be participating in a larger FabricPath network upstream, but this fact is completely transparent to Cisco UCS or any other device attached to a normal “Classic Ethernet” port.

The Nexus 7000 “Classic Ethernet” ports can still be configured for vPC, so the best practice recommendation of connecting Cisco UCS to Nexus 7000 with vPC uplinks in End Host mode still applies, with or without FabricPath.

The Nexus 7000 configured for FabricPath has an enhancement to normal vPC, called vPC+ which basically makes the Nexus 7000 vPC domain appear as one Switch ID to the rest of the FabricPath network. This is helpful in preventing the thrashing of Switch ID’s in the FabricPath forwarding tables, but has nothing to do with how Cisco UCS connects to the network.

More in this later…

The Nexus 7000 M1 series are the normal Layer 2 and Layer 3 capable linecards available since the beginning with an 80 Gbps connection to the switch fabric and 4:1 oversubscribed at the front panel 32 ports. Additionally, the M1 series linecard support hardware learning for 128,000 MAC addresses, and roughly 1 million IP routes. The M1 linecard Layer 3 capabilities and MAC scalability provides flexibility that is both simple and scalable, but at twice the price of the F1 linecard for an equivalent 32-ports of 10GE. If price is more important than density, an 8-port non-oversubscribed M1 linecard is available for almost half the price of the 32-port card.

The Nexus 7000 F1 series is a new 32-port 10GE linecard that supports Layer 2 forwarding only with a 230 Gbps connection to the switch fabric and line rate non-blocking forwarding (320 Gbps) for all Layer 2 flows local to the linecard. Additionally, the F1 linecard supports FabricPath and is FCoE ready. Every two front panel ports are serviced by a switch on chip (SoC) that supports hardware learning for 16,000 MAC addresses. If you simply spread all VLANs across all ports (all SoC), the entire linecard supports 16,000 MAC addresses. With careful planning, you can try to isolate VLANs to fewer ports, and therefore expose the MAC addresses in those VLANs to fewer SoC. The extreme case would be keeping any given VLAN unique to only one SoC, resulting in the F1 linecard supporting 256,000 unique MAC addresses (16 SoC’s each with 16K unique MACs).

Side note: When the F1 linecard receives traffic that needs Layer 3 switching, it will forward that traffic across the internal fabric to an M1 linecard (if one exists) for the Layer 3 lookup and forwarding.

Which linecard is best for Cisco UCS connectivity? Each is a good choice with pros & cons, so it really depends on what’s more important to you: cost, scalability, flexibility, bandwidth, over-subscription, etc.

You might choose the M1 linecard under these criteria:

You might choose the F1 linecard under these criteria:

In my experience, most customers connect their Cisco UCS to the Aggregation layer (this makes sense if you view the fabric interconnect as the Access layer). Of those customers, given the choice, most choose the M1 linecard, except for those where cost, low latency, and low over-subscription for Pod-to-Pod layer 2 forwarding is a key concern.

Some customers are beginning to deploy Nexus 7000 in both the Access (end of row) and Aggregation layers for density requirements and to prepare themselves for FabricPath. These customers are connecting their Cisco UCS fabric interconnects to the Nexus 7000 Access/Edge switch which is Layer 2 only by design, so the F1 linecard there is a no-brainer.

More on this later…

There isn’t a lot of detail that can be discussed right now because two things still need to happen. But I think I can give you a hint of where this is heading.

The key word in both items is software - Meaning, no new hardware that isn’t already available today will be required.

When these software capabilities arrive, we will begin to see topologies where Cisco UCS can link to a common pair of Nexus 7000’s that provide both the LAN and SAN infrastructure. The holy grail of unified fabric consolidation at both the access and aggregation layers starts to become a real world reality.

More on that later too…