I’m seeing some confusion in the blogosphere about how Cisco’s implementation of Network Interface Virtualization (NIV) really works so perhaps a very simple example is needed, and that is the intent of this post. My previous posts about NIV with Cisco’s Palo adapter were focused on the big picture and the complete solution, such as this post about NIV with the VMware vSwitch, and this post about NIV with the Nexus 1000V. Perhaps in all of the grand detail some of the fundamental concepts were glossed over so I am attempting to revisit the simple concept of how multiple virtual adapters can be treated as if they were multiple physical adapters to provide true Network Interface Virtualization (NIV), or as some others are calling it “Virtual I/O”.

I will start off with a server that has (4) physical adapters, (2) Ethernet NIC’s and (2) Fibre Channel HBA’s. Each adapter has its own cable that connects to a unique physical port on a switch. The network each adapter connects to (VLAN or VSAN) is determined by the configuration settings of the physical switch port. The adapters themselves are not doing any VLAN or VSAN tagging. The adapter presents itself to the server through the PCIe bus slot it is inserted into. Furthermore, the adapter presents itself to the network via the cable that connects it. 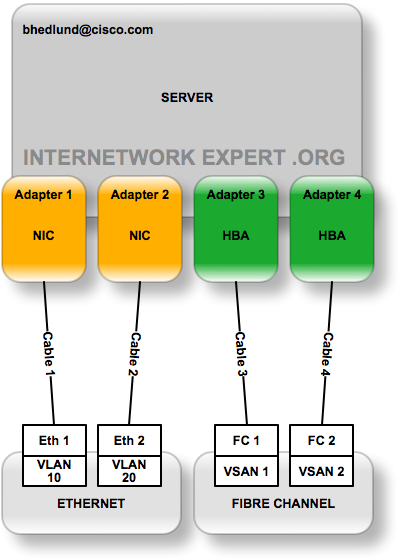 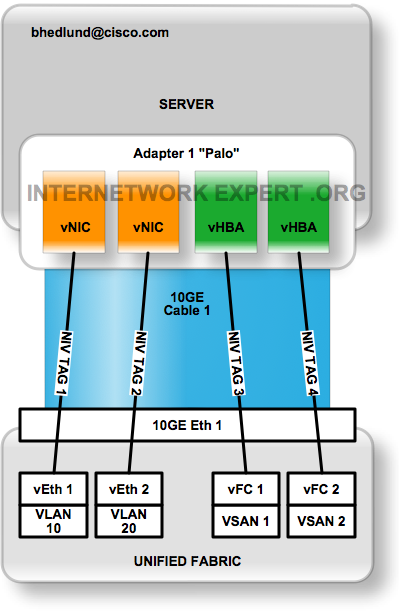 In the “before” picture no VLAN tagging was used to connect Adapter #1 to VLAN 10. The same holds true in the graphic above “after” where each vNIC can be configured exactly as the physical NIC with no VLAN tagging. Each vNIC and vHBA is given a cable, a virtual cable more specifically that is its NIV tag. That NIV tag is connected a virtual switch port on the unified fabric switch. The virtual switch port can be configured the same way as the physical switch port in the “before” picture with VLAN and VSAN assignments that determine which network each virtual adapters belongs to.

In summary, I did not need to make radical changes in the server or adapter configurations in order to reap the benefits of infrastructure consolidation. This is a result of providing true Network Interface Virtualization (aka “Virtual I/O”) from both the server perspective with SR-IOV, and the network perspective with NIV tagging.

I hope this simple example makes the fundamental concepts of NIV a little more clear and easier to understand.