After reading the first few paragraphs of this article it became quite clear that Egenera needs a closer look at their own math. Let’s examine the flaws in the article…

About the price of management software for a “legacy” Blade deployment of 20 chassis eGenera said:

OK, lets be honest here - YES - the “legacy” system is HP BladeSystem. Given that, to achieve the dynamic provisioning and stateless computing capabilities included in Cisco UCS, an HP BladeSystem customer would require not only a Virtual Connect Enterprise Manager (VCEM) license of $7,000 per chassis, they would also need another management platform called HP Insight Dynamics VSE with a per-chassis license cost of $20,000. The Cisco UCS comparative pricing is correct in showing roughly $27,000 of management costs per HP Blade chassis to achieve what is already included in Cisco UCS (dynamic provisioning, stateless computing, “logical servers”). The extra $700 per chassis is likely the pair of HP Onboard Administrator modules required per HP Blade chassis for device level management. Management modules per chassis are not needed with Cisco UCS, all device level management and provisioning is built in to the UCS Manager. 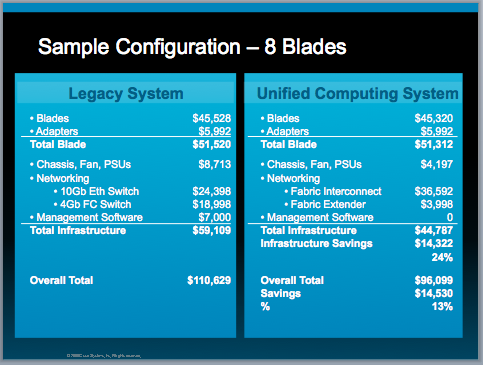 Moving on. Egenera claims that Cisco showed UCS pricing of a system that had no redundancy:

Also, the Cisco configuration for 320 blades includes 40 Extenders. We know this because if you divide the 8 Blade “Extender” cost into the 320 Blade configuration extender cost – it equals 40. We also know that each Cisco Blade chassis holds 8 blades, so 40 chassis’ are needed to support 320 blades. SO, there is ONE Extender in each Cisco Blade chassis in this cost comparison. That’s ONE extender for each of the 40 blade chassis. That means that the extender is a single point of failure for each blade chassis in this configuration. In contrast, the (HP) “legacy system” is priced with full redundancy.

Bottom-Line: Cisco is not providing a fair comparison. Advantage HP.</blockquote> 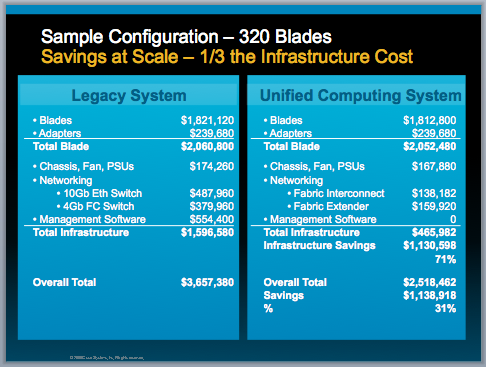 Egenera then tries to focus on bandwidth but gets it wrong:

The Extenders have only four 10Gb/s FCoE ports for attachment to the fabric switch. So, that amortizes to 5Gb/s for each Blade – “IF” the ports on the Cisco Blades can be teamed or configured as Active/Active

Correct that each fabric extender has four 10GE uplinks, and each chassis will have (2) fabric extenders as described above, which results in 80Gb/s of bandwidth to a chassis of 8 blades. That’s 10Gb/s to each blade.

Egenera also asserts that Cisco was unfair with respect to bandwidth in a 320 Blade deployment:

There is another factor at play. EACH Fabric Interconnect (aka Nuovo Switch) supports 40 Fabric connections to the Cisco Blade chassis. In order to support 320 Blades, each Cisco Blade chassis can only have ONE 10Gb/s connection to EACH of the redundant Cisco 61000 Fabric Interconnect switches. So, this results in EACH Cisco Blade chassis having a maximum of TWO(redundant) 10Gb/s fabric connections shared by 8 Blades. So this calculates to 20Gb/s for 8 Blades – or 2.5Gb/s per Blade. This, this tells us that the Cisco 320 Blade solution has a 2.5Gb/s fabric capacity. Now, for the “Legacy” (HP), recall the blades have redundant (2x) 10Gb/s Ethernet ports and redundant (2) 4Gb/s Fiber Channel Ports. The redundant (2) 10Gb/s Ethernet Switches in the “Legacy” system have a total of 16 X 10Gb/s uplink ports – so there is enough fabric and switch bandwidth for a true 10Gb/s Ethernet throughput for each Blade. The redundant (2) Fiberchannel Switches have 8x 4Gb/s fiber channel ports. Which is an additional 0.5Gb/s of Fiber channel through put per Blade in the Legacy system.

Bottom line: This is an unfair cost comparison of a 10Gb/s “Legacy” (HP) system to a 2.5Gb/s Cisco UCS system.

Quite the contrary, Cisco was actually overly fair to HP in this comparison (in my opinion). True, in a 320 blade single UCS system you will have (2) 10GE redundant uplinks from each of the 40 chassis. Keep in mind that Cisco never mentions bandwidth in this price comparison because it’s not about bandwidth – we are strictly looking at the cost to scale to 320 blades managed in a single system.

Why is this overly fair to HP? The price comparison Cisco showed in the 320 Blade scenario was overly fair to HP by not including the 10GE networking costs required for the 20 HP Blade chassis, where as the Cisco UCS pricing did include the networking costs (included in the UCS Manager price). The 320 Blade comparison was not factoring bandwidth, it was factoring extreme scalability, and thus Cisco was fair enough to leave out 10GE network costs for the HP solution while still showing those costs for its own solution. A truly fair comparison would have also included the cost for (40) 10GE network ports in the HP scenario, but Cisco was kind enough to leave it out.

Bottom Line: Cisco was more than fair with the 320 Blade cost comparison.

The article finishes off with even more bad math…

If a customer wants a full 10Gb/s fabric, each Blade Chassis will need two Fabric Extenders ($3,998 each) AND must use all 8X10Gb/s uplinks on the Fabric extenders. This also means the 40 Port Fabric Interconnect switch will only support –Five– blade chassis’ – not 40. So achieving a 10Gb/s fabric version of the Cisco UCS is limited to 40 Blades maximum.

Bottom line: If a customer is interested in full bandwidth 10Gb/s connections to each of the Blades, the entry cost is $138,182 for the networking only, and only for 40 slots. That’s $3,304 per Blade slot for infrastructure. And then the blades themselves are additional costs! 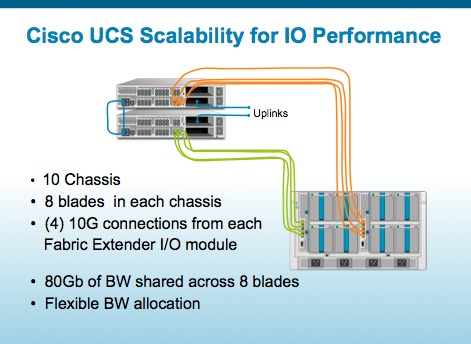 So lets assume the price of the UCS fabric interconnect in this scenario is $138,182. Actually, Egenera left out the cost of the fabric extenders for 10 blade chassis which would be $39,990. So lets add $39,990 to $138,182 and arrive at the number $178,162 which includes the price of the UCS Manager (Fabric Interconnect) and the fabric extenders for 10 chassis at full bandwidth. If a customer is interested in full bandwidth 10Gb/s connections to each of the Blades, the entry cost is $178,162 for the unified networking of 80 blade slots. That’s $2,227 per Blade slot for storage and IP infrastructure.

Now lets look at the networking costs for HP BladeSystem under the same 80 Blade scenario.

So lets look at the equivalent network costs on the HP side to provide 10Gb/s to 80 blades (to be fair):